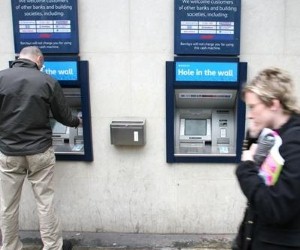 Fraudsters are targeting people at ATM's

Fraud and theft of bank cards and pin numbers has tripled in the past 12 months, according to new research from anti-fraud industry body Financial Fraud Action UK.

It found that there were 7,525 incidents of fraud in the first four months of 2013, compared to 2,553 over the same period in 2012 out of total ATM use of more than one billion instances.

This type of fraud involves thieves looking over a person’s shoulder while they put in their pin details and then take the card from the card holder as it comes out of the cashpoint machine.

The data was collected by Vocalink, a firm that operates the UK’s payment infrastructure and published by FFA UK, who are responsible for co-ordinating the prevention of card and pin fraud.

FFA UK said the number of fraudulent incidents is rising each month and the police believe the rise is partly down to the better security offered by chip-and-pin cards that have cut the possibility of fraudsters committing more sophisticated fraud.

The types of fraud committed include ‘card not present’ fraud whereby the card details are obtained, but not the card itself and are used to make online purchases or buy items by phone. This type of fraud is still the most common but has been falling since 2008. Total losses in 2011 reached £221 million.

Counterfeit fraud, sometimes known as ‘skimming’ is when a device is fitted to the front of a cash machine that reads an individual’s card details which allows fraudsters to produce a duplicate card. Again, this type of fraud is falling but still accounted for £36 million worth of losses in 2011.

ID theft is also falling. It involves the theft of a card and other identity details that are then used to open or take over a bank account. In 2011, this resulted in total losses of £23 million.

The theft or intercepting of credit and debit cards as they are delivered, known as ‘mail non-receipt’ has again fallen due to advances in technology and in 2011 accounted for £11 million of losses.

Detective Chief Inspector Dave Carter who heads the dedicated cheque and plastic crime unit said that part of the reason for a rise in the theft of bank cards and pin numbers was improvements in counter-fraud technology and the introduction of more secure chip-and-pin cards and better designed cash machines.

He said: "This equipment is difficult to get hold of, it's obviously illegal to possess it. It tends to be quite hi-tech and therefore it's expensive.

"This is a complete return to a simple distraction or con tactic if you like, so it's a lot cheaper and it can be effective," he added.