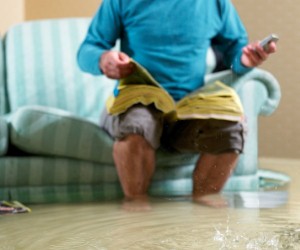 Call your insurance provider as soon as possible so they can make the necessary arrangements for temporary accommodation.

For thousands of people the start of 2014 has been miserable, as extreme floods and storms batter the country. Insurance companies are offering advice to customers to prepare them for any more periods of extreme weather.

More severe flood warnings have been issued for many parts of the UK as many try to recover from the impact of recent storms. Halifax home insurance reported a 300 per cent increase in flood related calls in December 2013

Senior claims manager for Halifax Home Insurance, Martyn Foulds said: “We are advising homeowners who are at risk to take steps now to reduce the risk of damage to their homes, and to monitor local news and weather updates.”

Halifax advises that if a property is at risk of flooding then place sandbags outside doors, windows and any other holes to reduce the amount of water that gets inside It also suggests turning off mains supplies of water, gas and electricity, as well as unplugging all electrical items.

Having a home emergency kit prepared is also a good idea, according to Halifax. This kit could include sandbags, torches, spare bulbs and batteries, your home insurance documents, other emergency contact details, tinned food, warm clothing and blankets.

The Post Office has also released a statement advising customers that they have increased staff numbers in order to deal with the surge in flood related calls.

It suggests calling your home insurance provider as soon as possible so if temporary accommodation is needed it can be arranged quickly. The Post Office advises that following a flood it is wise not to remove any items ruined by the flood so the damage can be properly assessed.

Photographs should be taken as they will prove useful when making a claim and undamaged items should be moved to a safe place. The Post Office advises people to listen to the radio for updates and further flood warnings.