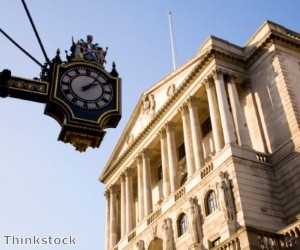 The Bank of England has issued a further warning on the capital levels of UK banks.

The central bank has warned that the UK’s biggest banks and building societies face a £120 billion capital shortfall that needs to be plugged by 2019 with the process starting in 2014.

One of the bank’s executive agencies, the Prudential Regulation Authority (PRA) published a 400+ page study detailing how 27 banks and one building society, thought to be Nationwide, must find a further £120 billion of capital to comply with new European Union regulations on bank capital to help ensure no further bailouts are required.

A number of investment banks, including JP Morgan and Goldman Sachs also face a capital black hole of between £27 and £29 billion. It was previously thought that the amount required by these non-deposit taking banks would be between £35 and £43 billion, but this was reduced by the PRA if investment firms balance sheets were adjusted.

In its report, the PRA said: The lower estimate reflects the reduction in risk, and therefore risk-weighted assets, that investment firms may hold once they have adjusted to the requirements."

The PRA said that in total 2,176 firms will be affected by the new EU rules and that the bigger banks face costs of £9.5 billion annually to meet the new rules, less than the foreign-owned investment banks with a presence in the UK.

The PRA said it would continue to use discretionary powers to ensure banks hold enough capital before the new rules come in.

Last month, the PRA warned that eight of the UK’s biggest banks, including Lloyds, RBS and Barclays have a combined shortfall of £27.1 billion in their core capital levels.

However, under EU rules adopted under the Basel III initiative that aims to triple the capital cushion that existed before the financial crash and provide further cover for taxpayers, the level of protection insisted upon has been increased.

A third element of regulation being introduced is a new limit on balance sheet strength in relation to levels of capital, called the leverage ratio.

Andrew Bailey, deputy governor of the Bank of England and the man in charge at the PRA said: “Well capitalised and resilient firms are crucial for ensuring financial stability and supporting UK growth.”

The PRA is still weighing up whether to impose limits on banker bonuses following recommendations as a result of the Independent Commission on Banking Standards. The ICB recommended that the PRA have powers to cancel bonuses not yet paid if it turns out that the bank requires a bailout and for bonuses to be deferred for 10 years.