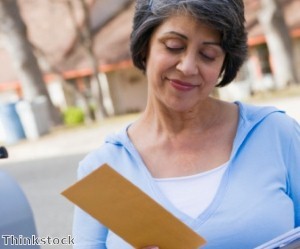 A local council has issued a warning to the public about sending money to scam mail fraudsters after one of its residents said she paid out over £200,000 over more than 50 years in fees without receiving any winnings.

Sylvia Kneller, 76, from Farnham in Surrey, said she became addicted to replying to letters in the post that suggested she had won cash prizes.

Surrey Trading Standards persuaded her to tell her story to serve as a warning to other people.

She first replied to the letters when she was 20 and soon became addicted to replying to the scam letters that advised her she had won large sums of money but could only access the winnings if she sent money to them for processing fees.

In a video posted on the Surrey County Council website, Ms Kneller said: "It does get you all excited and they shouldn't do that to old people. It's not right.

"But in your mind you believe it. Other people start on at you and you know they are right but you still believe, you still want to do it, it becomes like an addiction really.

"My first husband, we parted company over it because he was fed up with it and he ended up with my best friend.

"I do not send money out now because I can't afford it. If I had kept my money in my purse I would have been rich."

Surrey Trading Standards spokesman Steve Playle said her case was the worst he had ever come across.

He said his team were investigating over 80 cases in which people had repeatedly fallen for scam letters.

He said: "We want to encourage people to speak to their elderly neighbours and friends and if they are receiving these types of mail, to make sure they are not responding to them."

Gillian Guy, chief executive of national charity Citizens Advice, said: "In the last 50 years, scammers have been quick to embrace new ways to rip people off, including the internet and mobile phones.

"Our evidence from the last few years shows that scammers are exploiting difficult economic times and targeting people with fake job offers, training scams and phoney help with debt," she said.

"Scams are crimes so it is vital they are reported."