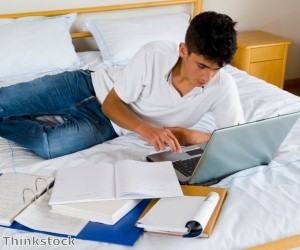 When teenagers leave home, what do you do with all their stuff?

As new students head off to university, mums and dads are being urged to free up their homes of their kids clutter by donating unwanted possessions. But how do you know what’s worth keeping, what’s worth donating and what’s destined for the bin?

Kids may be flying the nest this month as they head to uni, but parents across the country will still have about £300 million worth of reminders in their homes, according to new research which shows mums and dads are being left with both treasure and trash.

Two thirds of UK parents are left to look after their children’s possessions after they leave home, with one in five parents admitting to being left with an entire bedroom full of their kids’ abandoned belongings.

These belongings are worth on average £735 per household, yet one in ten parents have no idea what the value is of the stuff their kids leave behind. More worryingly a quarter either don’t know if the items are covered or don’t have the items protected at all.

Over a third of parents admit to having thrown out their child’s belongings after they left home without telling them./ But more than a quarter (28%) cling on to their children’s possessions for sentimental value.

While the emotional aspect is a key factor in the build of up clutter in the UK’s empty nests, more than half of parents (55%) surveyed by Lloyds TSB Insurance ended up clearing out their child’s room within a few months of them moving out. The majority of parents turn it into a guest room, while one in ten (13%) parents creates an office or library with the space.

So what do they do with all this junk? What if it’s actually worth something? And could these unwanted items actually be of use to a charity such as Shelter?
Shelter and Lloyds TSB Insurance have launched a Clutter Amnesty and are asking parents to consider donating any of their children’s unwanted stuff to the charity. But when sorting through these belongings how do they work out what’s wanted by others?