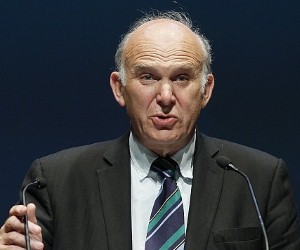 Vince Cable has accused the Bank of England of running a financial system akin to the Taliban in terms of imposing capital levels that UK banks must adhere too.

He said that the strict rules on strengthening UK bank balance sheets was of concern to the business community because it was using up capital that could otherwise be lent to businesses at a time when many are considering expansing and investing as the economic recovery takes hold.

Mr Cable said that the capital requirements imposed on UK banks is stopping banks from lending to small businesses and holding back the economic recovery.

The Chancellor, George Osborne is believed to hold the same view as Mr Osborne that the capital buffers insisted upon by the Bank of England to provide a buffer against a further financial crisis are too restrictive and hindering economic growth.

In an interview with the Financial Times, Mr Cable said: "One of the anxieties in the business community is that the so-called 'capital Taliban' in the Bank of England are imposing restrictions which at this delicate stage of recovery actually make it more difficult for companies to operate and expand.

“It is clear that the main banks are failing to support good British companies in key areas like exporting and innovation.”

The comments come less than a month after Mark Carney became the new Governor of the Bank of England and takes over a central bank with extra powers since the Financial Services Authority (FSA) was shut down and the Financial Policy Committee (FPC) and Prudential Regulatory Authority (PRA).

The PRA has ordered the five biggest UK banks to plug a £27 billion black hole in their balance sheets by raising a further £13 billion.

Mr Cable thinks this means banks will have less money to lend to businesses and individuals to support the fledgling economic recovery.

Anthony Browne, Chief Executive of the British Bankers' Association said on BBC Radio 4's Today programme: ”The trouble at the moment – and indeed for the last five years – is that we've had this massive increase in capital amongst banks of £165 billion during a time of low economic growth.

The issue erupted last month when capital requirements on Nationwide, the UK’s biggest building society and one of its fastest growing mortgage lenders, were deemed to be below the top tier capital ratio of three per cent of its total loan book.

Nationwide’s Chief Executive, Graham Beale said that the measure would impact upon his organisation’s ability to lend.

The Treasury communicated its concerns to the Bank of England and a few weeks after Mr Carney’s start, Nationwide was given an extra year to meet the new capital requirements, a sign that Carney took on board the concerns of the government.

Nationwide is looked at positively by the government as it has made efforts to increase mortgage lending while other banks have reduced lending.