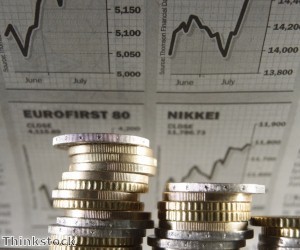 The consequences of the loss of the UK’s AAA rating are likely to be more political than economic.

This has been illustrated by the fact that the FTSE 100 actually went up on Monday, the first day's trading since the downgrade by Moody's was announced.

However, politicially, the Chancellor, George Osborne is under enormous pressure following the downgrade as protecting the AAA rating was one of his main priorities.

He had to face an urgent parliamentary question from his Labour counterpart, Ed Balls yesterday who accused Mr Osborne of being in "complete denial" about the situation.

Mr Balls called Mr Osborne a "downgraded Chancellor who has failed his own economic tests."

Mr Osborne responded by saying that Labour's plan for dealing with the situation was to borrow more and that the downgrade was a result of slow global growth and the difficult process of reducing debt, which Mr Osborne repeated, must continue.

He warned that the situation would get much worse if the government abandoned its efforts to lower the deficit. Mr Osborne told MPs that this was a "stark reminder" of the economic legacy inherited from the Labour party and that the government was not going to "run away" from the problem.

Moody’s, one of the three main credit rating agencies has stripped the UK of its coveted gold-plated credit rating and it is likely that the two other major ratings agencies, Fitch & Standard & Poor’s will follow suit in the coming weeks.

George Osborne asked the public to judge the coalitions performance on the economy with the UK’s credit rating in mind. He put a lot of emphasis on its importance as he believed that the policy of deficit reduction – the one the coalition decided upon to help lower the UK’s deficit and improve the economy – would help keep the UK’s AAA rating.

It hasn’t, because, as Moody’s pointed out, lowering debt has not been accompanied by economic growth, which would lead to higher tax receipts. More jobs and a lower welfare bill, which in turn would help lower the deficit.

However, the UK is not alone in having its credit rating cut. France and the United States suffered the same ignominy in 2011 and it has not harmed their economies too much, nor has it substantially increased the cost of borrowing.

Ian Winship, Head of Sterling Bonds at BlackRock said: "The likely impact of the downgrade will be political, with implications for the shape of the Chancellor's March budget and the outlook for the deficit.”

So, it is clear that the major impact is political. George Osborne is cutting an increasingly forlorn figure. His last budget resulted in weeks of bad press over ill-thought out policies on cutting taxes for the richest in society and government u-turns on the “pasty” tax, the “granny” tax and charitable donations.

Since then, although the public still clearly distrust Labour on the economy, the opposition has had some success in its argument that the government needs to focus on growth as well as deficit reduction.

This is because there was no growth in 2012 at all and Labour’s argument that the cuts need to be reduced and more investment strategies added has been echoed by the International Monetary Fund (IMF) and the Organisation for Economic Co-operation and Development (OECD).

Glenn Uniacke, head of options at the forex specialists Moneycorp, said: "The market's faith in the Chancellor's ability to pull off such a tough juggling act has been badly knocked, and as confidence in the Eurozone returns, by contrast investors are having ever more doubts about the UK.

George Osborne’s stock reached a new low with Friday’s downgrade and there are reports that suggest his days as Chancellor could be numbered. He will certainly have to produce a budget that is better received than the one of last year.

But what really matters is what will the economic impact of the downgrade be for us as consumers?

Most economists believe the economic impact of the downgrade for the UK will be limited. This is because most of the financial markets have already factored in the downgrade. They expected it to happen and have already priced the impact into their assessment of the UK. This means that the UK’s borrowing costs will not rise substantially.

They have already risen since their low in the third quarter of 2012. This is because of the rise in inflation of the last five months and a reduction in concerns over the eurozone sovereign debt crisis.

Secondly, there are now only two major economies that still have the AAA rating – Germany and Canada. In recent years The United States and France have been stripped of the top rating without a major impact on their economies.

This means that from a financial point of view, there is not the stigma of losing the rating than there would have been a few years ago.

However, Moody’s decision was taken because of the continued weakness in Britain’s medium-term growth. As eurozone economies have discovered cutting spending and increasing taxes does not reduce the deficit unless it is accompanied by growth.

The attitude of the UK government, one of austerity, has been matched by its people, who, realising the extent of the financial crisis and the changing economic environment since the credit crunch of 2008, has been a cautious one in which paying down debt is the priority.

Retrenchment does not lead to economic growth and without growth the efforts to reduce the deficit are stymied because of reduced taxation receipts for the Treasury.

It may be that the central bank has to loosen its control on inflation in order to try and deliver growth. There are signs that the bank is prepared to do this and incoming Governor, Mark Carney, who takes up the role in July has made comments that suggest he is prepared to focus on growth ahead of an inflation target.

The impact on sterling

The loss of the AAA rating will lead to further devaluation of the pound. However, again the impact will be limited because since the start of the year the pound has lost value because of a number of reasons, including the factoring in of the possible loss of the top credit rating.

However, one impact is that the pound has now lost its brief status as a “safe-haven” currency, which may also cause it to dip in value.

Schroders European Economist, Azad Zangana said: "Overall, this downgrade had been on the cards for some time, and the market reaction this morning suggests there are bigger concerns out there for investors. In a world where the pool of ‘AAA' rated assets is shrinking, we do not expect to see much of an impact.”

As well as this, the pound has been devalued because of comments by the Bank of England that a weaker currency would boost exports and the expectation from the minutes of the last MPC meeting that showed a change in voting patterns showing that more quantitative easing is likely.

Would a further weakening of sterling have a negative impact on the UK economy?

Some analysts believe it may not be such a bad thing as it could help UK Plc become more competitive as global growth picks up.

However, if the pound falls too quickly and in a disorderly way, then it could cause inflation to rise still further.

Analysts expected sterling to fall still further when the markets opened this morning after the sharp drop in the final half-hour of trading in the United States after Moody’s decision was announced.

However, though the pound fell more than a cent against the euro in early trading on Monday morning, it recovered strongly against the dollar.

Mr Uniacke believes the decision may actually act as a release valve for the pressure that sterling has been under.

He said: "It had been so heavily priced in that now it finally has, it may serve as a "reversal indicator" – perversely easing the pressure on the Pound as the uncertainty ends.”

Although most economists expected the downgrade, many thought Moody’s would wait until after the budget on March 20th.

Ian Winship said: "The timing of this decision is surprising for several reasons. In terms of the Economic story we would seem to be past the worst.”

The move puts pressure on the Chancellor, George Osborne politically for the reasons outlined earlier but is it likely to result in a change of emphasis from Mr Osborne, away from austerity?

The answer would appear to be a resounding “No!” As soon as Moody’s decision was announced Osborne issued an immediate riposte, that “far from weakening our resolve to deliver our economic recovery plan, this decision redoubles it”.

Howard Archer, Chief UK & European Economist at IHS Global Insight said: “The UK’s loss of its AAA rating comes as the Chancellor enters into the last few weeks in preparing for his budget on 20 March. The strong likelihood is though that it will not materially lead to a change in his plans.”