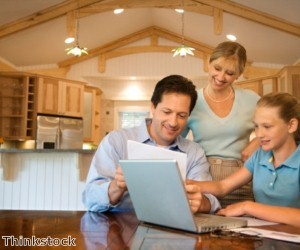 The latest Markit Household Finance Index shows a slower deterioration in household confidence in the economy.

Tim Moore, Senior Economist at Markit said: “Households were less pessimistic about their financial outlook in July, with reduced inflation helping ease the strain on budgets.”

People aged over 55 recorded the biggest improvement in their situation. They said that the deterioration in their finances had been the lowest recorded in the survey’s three-and-a-half-year history. People in this age group are more likely to live on fixed incomes and the recent fall in inflation will have benefitted them.

Over 55’s are also more likely to have paid off their mortgages, which means they are not affected as much by rising mortgage rates and rental costs, both of which have a big negative impact on respondents in this month’s survey.

Markit reports that the fall in inflation has helped lower debt levels and increase family savings but it has not yet had a noticeable impact on improving household spending.

Looking forward to the next 12 months respondents posted their most optimistic recording since April 2010. The future finances index rose to 43.1 in July, up from 42.8 in June.

This is the third month in a row where the index has improved. 29 per cent of households expect their finances to improve in the next 12 months compared to 43 per cent who think their finances will deteriorate.

Public sector employees have a more pessimistic attitude to the next 12 months than private sector employees, with 52 per cent anticipating a decline, compared to 37 per cent of people employed privately.

Interestingly, expectations concerning inflation increased for the fourth month out of five. The survey was conducted just before the latest data out that showed inflation fell to 2.4 per cent, a 31-month low, in June.

Tim Moore said: “Inflation has fallen more quickly than expected over the summer, but this is cold comfort for many households given continuing weak pay trends.”

Howard Archer, Chief UK & European Economist at IHS Global Insight said: “The good news from the Markit survey is that the squeeze on households’ finances eased in July, primarily due to lower inflation.

“The bad news is that heightened job insecurity, falling income from employment, still rising debt levels, and an increased reluctance to make major purchases suggest that consumers are unlikely to come to the crease and play a major innings to help the economy out of trouble in the near term at least.”