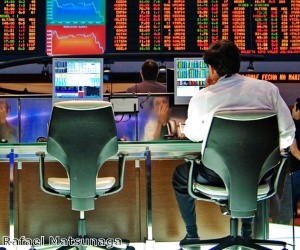 The consensus over what to invest in if you choose to invest in a stocks and shares ISA for this tax year is moving away from bonds into equities as investors search for a potentially higher return with the bond market depressed and returns from cash at historically low levels.

However, it is important to remember that with an investment ISA you can lose money as well as make gains so you need to choose the funds and type of investment carefully.

You also need to watch out for charges as high management charges can wipe out the gains that you might make.

The contrast between the poor performance of the UK economy and the excellent performance of the FTSE 100 means that investors are choosing to invest in companies listed on the UK index but who garner a high proportion of their profits from overseas operations. The FTSE 100 has risen by 11 per cent since the New Year to reach 6,500.

With the Bank of England’s Funding for Lending Scheme (FLS) and the continued low level of base rate at 0.50 per cent causing saving rates to fall the returns from easy-access cash ISAs are low, down from an average of 1.56 per cent 12 months ago to an average of 1.80 per cent now, according to data from Moneyfacts, investors are looking at riskier options for their ISA investments.

According to the Barclays Equity Gilt study which has tracked market movements since 1899, equities are expected to provide a return of four per cent after inflation over the next five years, compared to -2 per cent for bonds and -1.5 per cent for cash after inflation is taken into account.

Another important factor in determining where to invest is the weakness of sterling. Sterling has fallen by almost eight per cent against the dollar since the turn of the year and experts feel that investing in global equities rather than UK equities as a hedge against the weak pound.

In this feature we look at the key questions to consider in where to invest your £11,280 ISA allowance in an investment ISA, taking the views of experts as we consider which companies and funds to opt for.

The impact of sterling

The weak UK economy, quantitative easing, high inflation and the loss of the UK’s AAA credit rating have combined to push the value of sterling down since the start of 2013.

This has put into question the status of the UK as a safe haven and with the US economy coming out of the global downturn faster than the UK and emerging economies still growing albeit at a reduced rate, many fund managers are increasing their exposure to global equities at the expense of UK equities.

Writing in the Sunday Times last month, Anthony Cross, fund manager at Liontrust Asset Management said: “Sterling weakness may be the best way to make a profit this year because the weaker pound could be good for UK listed stocks.”

Cash or stocks and shares?

With the Bank of England’s Funding for Lending Scheme (FLS) and the continued low level of base rate at 0.50 per cent causing saving rates to fall the returns from easy-access cash ISAs are low, down from an average of 1.56 per cent 12 months ago to an average of 1.80 per cent now, according to data from Moneyfacts, investors are looking at riskier options for their ISA investments.

This means that unless you can tie your money away for at least three years you are not going to secure a rate that beats the current consumer prices index (CPI) rate of inflation which is 2.7 per cent. Even if you do get a rate just above that, inflation is predicted to rise through the first six months of this year.

Tom Stevenson, Investment Director, Fidelity Worldwide Investment says: "The answer this year is a relatively easy one because the rates on cash are so pitiful. This is in part a result of the government's funding for lending scheme which is designed to encourage banks to lend more by giving them access to cheap funds.”

Over the last few years bonds have been the most popular choice providing faster and more reliable returns but in the last five months according to the latest statistics from the Investment Management Association (IMA) equities have been the leading asset class.

The consensus is that the best days of the bond market are over for now. Whereas previously bonds, in a period of falling interest rates have provided returns at almost the level of equities, now, according to Tom Stevenson, the “relative attractions of shares and bonds are much more finely balanced.”

He said: "In contrast, with the exception of US shares, equities generally look good value compared to where they have traded over the longer term.”

Equities offer income and potential for growth but more volatility, but bonds offer income, lower volatility but less of an opportunity in recent years of making capital gains.

Many investors will opt for a mix of both assets in their portfolios to help spread their overall risks.

Do you invest in the UK or abroad?

The UK economy is performing badly, but the UK stock market has leaped to record highs. This makes investing in UK companies that make many of their profits oversee a good option.

Even though the UK has lost its AAA credit rating, it doesn’t necessarily make the UK a bad place to invest as long as you focus on firms that trade across the globe.

Adding some options from the emerging markets such as India and China will give the potential for higher returns and accessing funds from Japan and the United States means you are able to find technology stocks that are not available in the UK.

However, as with asset classes, investing in funds or companies spread over a wider geographical area makes sense in spreading the risk attached to your portfolio.

Tom Stevenson suggests having a 50:50 mix of home and away stocks. He said: “Many of our leading companies earn a high proportion of their profits overseas and this has led to a mismatch between the performance of the UK economy and that of the London stock market.

“However investing in Asia and other emerging markets remains very popular. Investors seem to be taking a barbell approach – half at home and half away. In an uncertain environment, that seems pretty sensible."

The pace of growth seen from emerging markets has slowed as a result of the overall slowdown in global economic growth. However, there are still higher potential returns available if you are prepared to invest over the medium to long term and can afford to ride out market fluctuations.

It may be time to look at Africa too, as opposed to the usual suspects such as Brazil, Russia, India and China which are down 6.2 per cent over the past 12 months. While the UK and American stock markets have risen by 5.7 and 11.3 per cent respectively, African markets have gone up by 61.2 per cent, according to MSCI studies. Other “frontier” markets such as Bangladesh and Vietnam are also tipped for higher growth this year.

Again, with the US economy recovering faster than many other parts of the developed world, there may be sense in including both emerging and developed markets in your portfolio.

Passive investments such as index trackers and exchange traded funds are cheaper and easier to understand but they can never outperform the index, so again, it makes sense to combine passive and active funds.

Tom Stevenson comments: "Passive funds are likely to be best suited to well-researched developed markets where gaining a competitive edge can be more difficult for fund managers while in less well-researched emerging markets, or when investing in smaller companies for example, an active approach is likely to be better."

Whether you choose to focus on instant returns or long-term growth depends on what stage of life you are at and whether you need your investments to provide immediate returns or a steady income.

If you are looking to receive regular dividends you should focus on income and choose to invest in companies that have a history of providing reliable returns. Growth investors are keen on companies that grow profits quickly which can make them a more volatile investment.

Gold is an alternative that could still appreciate further in a highly volatile global economy. Although its rise in value has slowed over the last two years, gold has increased in value from just over $400 per ounce in 2005 to just under $1,600 an ounce now.

Daniel Fisher, CEO of Physical Gold, said: “ISAs are normally the first thing that people think of when it comes to making the most of your savings and investments. There is, however, another easy way to keep the taxman’s hands off some of your money, and that is by buying gold.

"Not only is gold tax-free, but there are no limits with the amount of money you can put in, unlike ISAs. Gold still provides a safe haven and many people find it useful to have it in their portfolio to balance risk. Plus, with annual average returns of around 36% it has comfortably out-performed equity ISAs.”

Which companies to invest in?

Bearing in mind the performance of the UK stock market in contrast to the UK economy, Diaego and Unilever are UK listed firms that garner much of their profits from overseas operations.

Helal Miah, investment research analyst at The Share Centre, thinks Centrica are a good option because it is expected to increase production by 12-15 per cent in 2013.

He said:  "Centrica is a defensive choice with a yield of about 5% and, from an investment perspective, there is hope for some steady growth potential."

He also picks BHP Billiton if you are looking for some exposure to the commodities sector though she admits its fortunes depend on better growth from China than was seen in 2012.

He said: “Leading economic indicators from China released in the last few months of 2012 have painted a slightly better picture.”

Which funds to invest in?

Tom Purdie of Fundexpert believes gold mining funds are undervalued at the moment.

He said: “Gold mining shares were horrible performers in 2012 (down 19.38 per cent). In contrast the gold price itself edged up. There is now the opportunity for these relative performances to reverse."

"This dichotomy is certainly a lesson to be learnt. Gold mining shares are fascinating, cheap, and an interesting punt for contrarian ISA investors at a loss on what to do this tax year. Those looking to invest should drip money into Smith and Williamson Global Gold".

"We believe the manager, Thomas Moore, is a rising star within the investment world and the portfolio has certainly benefitted since he took to the helm in January 2009.”

Andy Parsons explains why he likes the BlackRock European Dynamic fund: “It provides diversification that a portfolio based solely in UK companies cannot, for example Demark is a world leader in alternative energy solutions and Germany has world class engineering companies and car manufacturers.”

He added: "The Invesco Perpetual Global Smaller Companies fund is suitable for investors looking to diversify their portfolio through geographical representation as well as market cap size.

"This fund tends to have a large number of holdings, providing investors with the comfort that given the often volatile nature of such companies, risk and diversification is spread across not only a vast number of companies, but more importantly across geographical regions as well.”