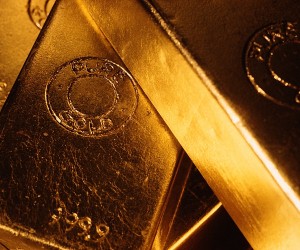 Gold has lost around 15% of its value in April

New research by Barclays Stockbrokers reveals that 41 per cent of its clients believe gold will retain its current values of between $1,300 and $1,500 per ounce over the next six months.

However, 31 per cent believe it will recover from its lowest level in two years to regain its value of over $1,500 per ounce.

28 per cent expect the commodity to continue to decline in value over the next six months.

Barclays Stockbrokers say that the recent fall in value has prompted investors to reinvest in gold.

Paul Inkster, Head of Product at Barclays Stockbrokers, said: "Following the recent fall in the value of gold to its lowest level in two years, our poll reveals mixed investor outlook for future volatility around the gold price, with 41% of investors expecting the value to remain at current levels across the period of the next six months.

"We also saw our ETC clients react to the fall in gold value last week, with three of the top five traded ETCs gold related products. While global economic events will no doubt continue to impact the value of the commodity, and as low inflation drives down demand, there is still a level of optimism for the value of gold as shown in the results of our client research. "