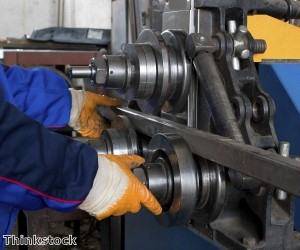 Industrial output in Britain rose for a third month in a row, even if it was at a sluggish pace, according to new figures by the Office for National Statistics (ONS).

The sector rose by 0.1 per cent in April, following a 0.7 per cent jump in March the month before. This is great news considering that industrial output actually contributes towards 16 per cent of the British economy. The major factor that drove this rise was a 0.9 per cent rise in mining and quarrying.

Manufacturing meanwhile, fell by 0.2 per cent in the month, generally creating an overall flat picture for the sector. Wood, paper and metal production were the fields which contributed towards this fall in manufacturing in April.

Howard Archer, Chief UK & European Economist at IHS Global said: "Resilient industrial production in April added to the recent good news on the UK economy and boosted hopes that the manufacturing sector is cranking up to contribute to UK growth."

Whilst this growth has been at a slow pace, it is important to note that output is still down 0.6 per cent, when compared to this time last year. Furthermore, all sectors, except gas, electricity and air conditioning, were down on 2012 figures, whilst manufacturing also saw a similar decline of 0.5 per cent in the same period.

Within the latter field, rubber products, chemicals, tobacco, beverages and food products were particularly hit hard. Generally, a narrower measure of manufacturing output, which excludes energy production and is viewed as a better view of the sector's health, shrank by 0.2 per cent on the month.

However, the outlook for manufacturing appears to be quite positive. Surveys of managers showed that factory output expanded in April and was further growing in May at its strongest pace in over a year, so many will be waiting with bated breath until the official second quarterly figures are released later this year.

Mr Archer added: "Manufacturers will be hoping that the recent signs of improvement in the UK economy are sustained and that this increasingly lifts business and consumer confidence which in turn translates into higher demand for capital goods and consumer goods."