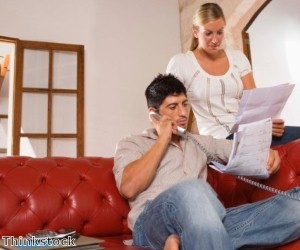 We all want broadband, didgital TV and cheaper phone calls but how do we get them and who offeres the best value for money. Myfinances.co.uk’s Kate Saines investigates the various ‘bundling’ packages available.

Having a fast internet connection, a variety of digital TV channels as well as a landline has become essential for many households in the UK.

But despite hugely competitive prices available on these services, more than half the adult population is still paying over the odds by failing to take advantage of packages on offer.

According to price comparison website, Moneysupermarket.co.uk, savings of up to £320 per year can be made simply by taking out a subscription to all these services with one provider.
‘Bundling’ as it is known, involves paying one provider for two or more products. And taking this route is being hailed as one failsafe way to reduce your household bills.

But are these deals really any cheaper in the long run and are there any pitfalls to ‘bundling’? Myfinances.co.uk has looked into the market to find out how the deals compare and what to look out for.

We posed as a customer who needed a TV subscription which has all the sports channels, including Sky Sports, all the children’s channels as well as the ability to record television programmes and rewind and pause live TV.

We also asked for broadband and a telephone line rental package which included free calls – ideally 24 hours, seven days a week, but other options would be considered.

The first provider we called was Sky. The television package we were offered was Sky Plus, which allows users to record, pause and rewind live TV, and which would cost £39 per month.
Sky charges an extra £1 per “package”. So, on top of paying additional cash for the sports channels and movies you will be charged an extra £1 a month if you want all the factual channels, and a further £1 for kids’ channels, for example.

We opted for kids and sports.

Sky was also keen to push the Sky High Definition (HD) service. Although there was currently a deal which meant there would be no extra cost for the Sky HD box, we would have to add an additional £10 on per month for the benefit of being able to watch some channels in HD.

The landline deal was very competitive. Signing up to Sky Talk would mean paying £5 per month for unlimited calls to landlines. What’s more if you opted for this in your bundle it would mean you would pay just £5 per month for ‘Everyday’ broadband, a 10Mb service which offered usage of up to 300 hours a month.

Sky charges a £30 application fee for this deal. So, in the first month you would pay £79 for the service, including the fee, and in the following months £49.

If we had opted for a HD box, we would pay £59 a month for all television, broadband and telephone needs.

So, what about Virgin Media? This provider has recently announced it is to become the first to offer free calls to mobile phones via its landlines. Although these calls are only to Virgin Mobiles, it is still a pioneering move.

According to comparison website, Broadbandchoices.co.uk, Virgin also offers the “ultimate in bundling” via its Quad Play service. This combines digital TV, broadband, home phone and a mobile broadband subscription.

Quad Plan is a little above the requirements we had in our mystery shopping expedition, however. But Virgin still came up with a tempting package for us.

For its medium TV package, which included 65 channels, catch-up TV from the last seven days, plus the full Sky Sports collection, plus 20Mb broadband and a landline with unlimited weekend calls to landlines and Virgin Mobiles we would pay £60.50.

There was currently a deal for free installation, which normally costs £35, and the first two months of this one year contracted offer, would only cost £35.

Adding this up over a year, and not taking into consideration the cost of any calls made, this would set us back £675 annually.

Sky’s package, meanwhile, would cost £618 over the year. Although this is slightly less than the Virgin package, it does not include as many channels as Virgin and does not include catch-up TV. The broadband service only provided 10Mb instead of the 20Mb offered by Virgin.

What about BT’s service? Years ago, before privatisation, this was the only company you could buy a telephone landline service with.

More companies moved into the market offering tough competition for BT, but it has recently been deregulated which means it can now offer discounted bundles itself.

It has also developed its BT Vision digital television package.

Again, the better deals were on offer with BT if you ‘bundle’. Getting BT to provide your landline as a standalone product would cost £15.78 per month for a service which included free evening and weekend calls.

In addition, buying the BT Vision package on top would set you back an additional £14.99 per month for the basic ‘bronze’ package. This includes the digital channels plus your choice of two ‘packs’ of programmes. Packs include music channels, sports channels, movies and kids’ shows.

It also offers ‘on demand’ television and regularly provides deals where you can buy the BT Vision box for free, instead of the normal £200.

Although BT Vision does not provide the Sky Sports channels, it does offer Vision Sport, which includes a number of sporting events such as Premiership football and boxing matches on demand.

This includes classic fixtures from the past, but also recent games available after a two-hour delay.

Monthly this deal would cost £43.77, or £48.27 with free calls to landlines during the day as well as evenings and weekends.

Annually, this would set you back £579.24 – making it by far the cheapest. If we had not called while a deal was running offering the BT Vision box for free, however, it would have cost us an extra £200.

We also asked each provider to give us the standalone price for, what we considered to be, their flagship service.

BT said we would pay a basic rate of £15.78 for the phone line which would include free evening and weekend calls.

Virgin could provide broadband at £14 per month.

And Sky offered us the package we wanted, on its own, for £39 per month.

This provided a grand total of £68.78 per month. That would be £825.39 per year, and this is without factoring in the cost of Sky boxes and extra phone calls.

Bundling, therefore, is almost certainly the cheaper option. When you also consider our ‘mixed package’ is based on the latest most competitive prices, it would appear there are probably many people out there who have not shopped around for new deals for ages, who are missing out.
There are several things to watch out for, however.

Not all the providers can offer services in all areas of the UK. Virgin, for example, was only able to give us their package details in theory as we were located in a place where its fibre optic cables had not been laid.

They told us we could still receive a phone line and broadband, but the connection would not be as fast because its much-lauded high-speed service only worked using fibre optic cables.

It’s also important to remember that while some landline deals might sound great on paper – £5 per month, for example – you will be charged for mobile calls and 0845 numbers.

What’s more, the free landline calls are often only without charge for the first 60 minutes. So you have to remember to put the phone down after an hour and redial to ensure you don’t pay.
Moneysupermarket.com also advised to beware of free gifts. Considering your needs, it says, is far more important than a freebie.

It also urges you to beware of contract quirks and hidden charges such as non-direct debit payment charges and cancellation fees.

But, overall, the message is that if you want to save money, your broadband, TV and telephone services can provide the ultimate place to do this.

Our research was based on one set of requirements. But all the providers will be able to offer you bundles which suit your circumstances.

And James Parker, of Moneysupermarket.com, says: “Whether it is every TV channel, superfast broadband or unlimited talk packages your are looking for, providers will be able to tailor a package to suit your needs.

“I urge anyone who hasn’t done so in the last 12 months to look at their subscription services to see where they could make some good savings.”