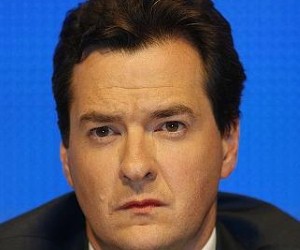 A gloomy day for George Osborne

The economy grew by 0.9 per cent in the third quarter, according to the Office for National Statistics (ONS) who issued their revised and final figures today, rather then by one per cent.

However, the GDP downward revision does not change the overall picture of an economy that has been essentially flat for the past 12 months and the important point is what happens in 2013.

But it does take a shine off of the best growth figures for five years that helped bring the country out of the longest double-dip recession since the 1950's.

Last month, the Governor of the Bank of England, Sir Mervyn King, warned that the UK economy is likely to continue to zig-zag with output expected to both increase and contract in individual quarters of 2013. He also said that he expected GDP growth to be negative in the final quarter of 2012.

The Bank of England recently downgraded its forecast for GDP growth in 2013 down to just one per cent and the independent Office for Budget Responsibility (OBR) revised its forecast down to 1.2 per cent when it announced its latest forecasts alongside the Autumn Statement.

Meanwhile the services sector – which accounts for almost 75 per cent of UK economic activity – increased by 0.9 per cent rather than 1.2 per cent.

However, with data showing weak retail sales and a dip in construction activity it could be touch and go as to whether there is shrinkage in the economy in the last quarter of 2012.
If that does happen and the economy struggle in the first three months of the New Year, then the UK could be heading for an unprecedented triple-dip recession.

Howard Archer of IHS Global Insight said: “The modest revisions to the GDP data do not fundamentally change the story of an economy that is likely to have been essentially flat overall in 2012.

“It currently looks touch and go as to whether the economy can avoid renewed contraction in the fourth quarter as it faces the unwinding of the Olympics boost.

“The economy faces a difficult looking 2013 and we suspect it will find it will only manage to eke out growth of 1.1%,” added Mr Archer.