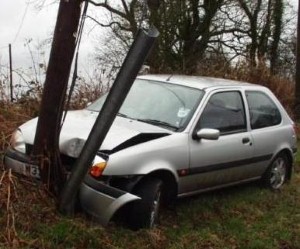 Staged motor accidents are putting the public at risk

Insurers are calling for a national strategy to reduce fraud, which is costing each UK household £650 per year.

Regional fraud squads and better sharing of information are also needed to check the growth of fraud, according to the insurance industry.

Levels of fraud have doubled in the last five years and it now costs the UK around £16 billion a year.

Insurance fraud costs the UK £1.5 billion a year and adds about five per cent to premiums, hurting the wallets of consumers.

The government will publish recommendations for tackling fraud in the summer, and ahead of this the Association of British Insurers (ABI) has published its recommendations.

“The extent of fraud is under-estimated, and its detection under-resourced. Yet its impact is very real and serious. It has become as big a money earner for criminal gangs as drugs” said the ABI’s director general Nick Starling.

He added: “And with the emergence of staged motor accidents, increasingly the public are at risk.”

The ABI wants to see the development of a national fraud strategy that includes action plans and targets.

“We need a national fraud strategy based on greater prioritisation for police and [the] Crown Prosecution Service to reinforce action being taken by the insurance industry to reduce the problem,” said Mr Starling.

The ABI wants regional fraud squads to provide the police with expertise and resources, along with better data on the fraud risks to different sectors.

It is also calling for improved information sharing between the public and the private sector.