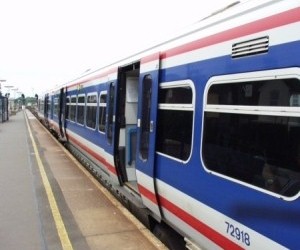 The government is being urged to reduce train fare increases

Rail users are facing average fare increase of 6.2 per cent after today's inflation data showed that the retail prices index (RPI) measure of inflation increased to 3.2 per cent.

English rail users will see an average increase of three per cent plus the retail prices index measure of inflation for July. This increase is based on an average across all regulated tickets, which make up half of all fares and inclue season tickets and off-peak intercity travel.

Some commuters will see their fares increase by more than the average as the networks are free to do this as long as they reduce fares on other routes. The extra money will be used to fund improvements to the network.

Governments and commuters used to split the cost of funding the railways but successive governments have cut their share of the funding resulting in regular above inflation fare increases for passengers.

Rail fares are set to increase at three times the rate of rises in salaries, according to a new report published by lobby group The Campaign for Better Transport.

Average fares are set to rise by 6.2 per cent, but due to the “Flex” system, many commuters will face increases of more than ten per cent.

The “Flex” system allows train operators to raise the cost of season tickets by an extra five per cent as long as they limit increases on other routes.

The Campaign for Better Transport is calling on the government to scrap its plans to impose regulated fare increases of three per cent above the retail price index measure of inflation for July. Scotland's rail fare increases are calculated by RPI plus one per cent. Wales have yet to set their ratio for calculating the fare rises.

Commuters are furious at the price increases that have been approved since the coalition came to power that have not resulted in a corresponding increase in services.

The Campaign for Better Transport says that many commuters have faced a £1,000 increase in annual season tickets since the coalition came to power in May 2010.

The coalition is committed to above inflation rail fare increases for the duration of this parliament that runs until 2015.

This will see passengers travelling on many popular commuter routes into London such as from Brighton, Eastbourne, Reading and Canterbury face £1,000+ increases to the cost of their annual season tickets.

Stephen Joseph, The Campaign for Better Transport’s chief executive said:  “If the Government sticks by its policy, rail fares will rise three times faster than salaries. With the economy flatlining, this is untenable.

“The Government knows they can’t continue to hit commuters – that’s why they’ve postponed the fuel duty increase. Now they need to give the same help to rail users.

"Our railways need to be affordable to ordinary people, not just 'train toffs' on high incomes.

“If rail fares are allowed to gallop ahead like this, many commuters to London will soon being paying as much to travel to work as they do in income tax. This is no way to stimulate the economy.”

However, Theresa Villiers, the rail minister, said: “We are determined to get the cost of running the railways down.

"That is the most effective way to respond to passenger concerns about fare levels. Our reform plans aim to deliver £3.5 billion in efficiency savings while continuing to expand services for passengers. Savings on that scale will enable us to end above inflation fare rises."