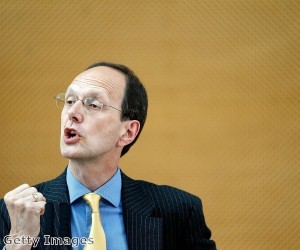 John Cridland the director general of the CBI

The CBI says that the UK is “beginning to see the return of organic growth.”

The CBI says that it expects economic growth to pick up in 2014 but that threats to economic stability, notably from the euro debt crisis remain.

It predicts the economy will grow in the first quarter of 2013 and avoid a triple-dip recession.

CBI director general, John Cridland warned in the employer groups latest economic forecast that economic growth will be slower in 2013 than previously predicted and that the government will have to borrow substantially more by 2015 than previously forecast.

He told the BBC Radio 4 Today programme: "During January I'd just begun to see signs that small, medium and large companies – particularly those exporting and beginning to get some benefit from the eurozone crisis moving away a little bit and the slightly better news from America – are feeling optimistic about what will come next.

"At the moment the economy's pretty flattish but I think there's just signs we might be edging upwards," he said.

Meanwhile, the CBI estimates that that government borrowing will reach £112.5 billion in 2014, up by £10 billion from its November prediction. This is more than three times the level of borrowing the government itself predicted of £35 billion in the year to March 2015.

“Looking ahead, external risks to the outlook in the Eurozone and further afield are likely to keep growth at home and abroad in check.

“The potential for Eurozone tensions to flare up again, coupled with tough conditions in the domestic market, explain why business confidence remains patchy. After the uncertainties of 2012, the fear of external storm clouds lingers.”

The CBI expects inflation to continue to rise in the first part of 2013 from its current level of 2.7 per cent where it has been for the last four months. It then says inflation will fall back towards the Bank’s target of two per cent where it is likely to remain for the duration of 2014.

Inflation will still stay well above average earnings growth in 2013, which the CBI predicts will be 1.7 per cent. It expects the two to finally meet in 2014 when households can finally have some respite from the squeeze on disposable income.

Mr Cridland said he was in broad agreement with the Chancellor’s austerity measures but that there was scope for more infrastructure spending as long as it was not funded by more borrowing but by diverting existing funds from other departments such as welfare.

On current government infrastructure spending plans, Mr Cridland said: “The Government’s efforts have not had the momentum and urgency that I’ve been looking for. I don’t think there are any big levers on growth that the Chancellor has not pulled. We just want them pulled with a bit more elbow grease.”

He said that he hoped Mr Osborne would make infrastructure spending the focus of his March budget: "He put a lot more into capital spending back in December in his Autumn Statement. I'd like to see him do more of the same."