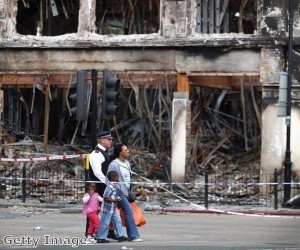 A rift between the Police authorities and the insurance industry looks set to grow as the argument over who picks up the bill continues.

The police are concerned that funds they have in place will be used to pay for insurance claims resulting from the disorder across the UK over the last four days.

The Riot Act dates back from 1886 and allows insurers and uninsured individuals to recoup costs from the police under circumstances that are deemed as a riot.

The cost of loss of goods and damage to property has been estimated at over £100 million, though the final bill could be even larger.

The Association of Police Authorities (APA) today described the Riot Act as an “out of date law.” However, the Association of British Insurers (ABI) said that the regulations had worked well for 125 years.

The APA has argued that the police should not have to foot the bill for the damage and loss of property, especially at a time when they are facing swingeing cuts.

Ann Barnes JP, Deputy Chair of the Association of Police Authorities said in a statement issued by the APA: “It seems to me a nonsense that when policing is facing unprecedented cuts and meeting the costs of ongoing disorder, it must also bear the brunt of paying for criminal damage because of an out of date law.”

Some individuals and businesses affected by the riots who were uninsured could use the Riot Act legislation to claim for the cost of loss or damage incurred as a result of the riots. However, to do this they must inform their local authority of their intention to claim within 14 days of the incident.

The APA is concerned that some insurance policies have exemption clauses for damage to property or theft of goods but the ABI insists that most policies will pay out as a result of the actions of the rioters.

Ann Barnes has called on the government to provide emergency help to the police authorities if they have to pay out for riot damage. Police authorities are unable to get affordable insurance themselves to cover the cost of compensation.

Ann Barnes said: “We therefore urge the Government to consider emergency help for the police in the light of these liabilities and the inevitably significant costs of responding to such extraordinarily widespread criminality, not least in terms of overtime and mutual aid between forces.”

However, the ABI said that the Riot Act provides a safety net for the underinsured and means that insurance premiums don’t rise each year for what is a rare event.

In a statement the ABI said: "This compensation scheme has existed on the statute books since 1886 with its operation having stood the test of time for the last 125 years."

The ABI has also written to the Home Secretary requesting that the 14 day deadline for making claims is extended to 42 days.

A spokesman for the Home Office said: "We are in the process of reviewing the Riot Damages Act and are considering all options for reform.

"However, the legislation still remains in place and claims for compensation can still be made from businesses and households to police authorities."

Use the Myfinances.co.uk comparison tables to find the best deal on all types of insurance.