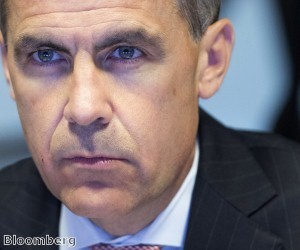 The Bank of England has announced that it is to adopt a policy of forward guidance on interest rates.

Mr Carney stressed that unless there was a dramatic fall in the number of people unemployed, there will be no change to interest rates that have been at a record low of 0.50 per cent since March 2009.

Mr Carney said the new policy was required now, just as the recovery appears to be gathering steam, because that is the time the markets expect to see a rise in interest rates.

Announcing the new measure, Mr Carney attempted to reassure households and businesses that the cost of borrowing is not going to rise anytime soon.

He said: "Until the margin of slack within the economy has narrowed significantly, it will be appropriate to maintain the current exceptionally stimulative stance of monetary policy.

"We need to provide as much clarity and as much certainty about the path of monetary policy."

However, the stock markets were unconvinced by the decision and factored in a rise in interest rates earlier than it had previously thought would be the case. The FTSE 100 fell by almost one per cent, down to 6539 by 4pm after reaching 6620 just before the announcement by the Bank of England.

The bank said that it would consider raising rates before if the public's medium-term inflation expectations rose to dangerously high levels, if it forcasts that inflation will be at or above 2.50 per cent in 18-24 month's time or if the record low interest rates pose a threat to the UK's financial stability.

If these three scenarios became apparent, the bank would 'knock-out' the link between interest rates and unemployment.

The Bank of England expects the unemployment rate to fall to 7.3 per cent in two years time, the time of the next election, so if this forecast is correct base rate will be at a record low at the next General Election.

Mr Carney welcomed the economic recovery but added that it was the slowest recovery in output on record. He said “there is understandable relief the UK economy has begun growing again but there should be little satisfaction”. He added that the economy had not reached escape velocity yet.

Mr Carney said: "A renewed recovery is now underway in the United Kingdom and it appears to be broadening.

"While that is certainly welcome, the legacy of the financial crisis means that the recovery remains weak by historical standards and there is still a significant margin of spare capacity in the economy, this is most clearly evident in the high rate of unemployment."

The business community responded to the announcemnt with enthusiasm.

John Cridland, CBI Director-General, said: “Greater interest rate certainty and clarity from the Bank should provide a shot in the arm for business and household confidence.

“This is a pro-growth statement with an important eye to inflation risks, and unemployment is an appropriate measure of economic progress."

John Longworth, director general of the British Chambers of Commerce, said: "This will give businesses a much-needed confidence boost when looking to invest, as they know that any plans will not suddenly be derailed by a hike in interest rates."

The bank also published its latest Quarterly Inflation Report and raised its forecast for inflation next year from 2.1 per cent to 2.5 per cent, whilst keeping its inflation prediction for 2013 at the same level as in May, at 2.9 per cent. It raised its forecast for economic growth in 2013 from 1.2 to 1.5 per cent and upped its predictions for 2014 dramatically from 1.8 to 2.7 per cent.

Steve Wilkie, managing director of retirement specialists Responsible Life said: “Its prediction that CPI will stay 0.5% over target for up to two years will be a bitter blow for anyone who relies on savings for their income.

"Constant price rises are eroding the spending power of the millions of pensioners whose income is fixed. They remain the big losers of the Bank's loose monetary policy.”

The Bank of England will leave interest rates unchanged until 2016 unless its forecasts change or there is a new development that undermines the economic recovery.

However, while the unemployment rate is above 7.0 per cent, the bank said “it stands ready to undertake further asset purchases if additional stimulus is warranted”. It will not begin to unwind the current £375 billion QE programme until the unemployment threshold is reached.

Even when the unemployment rate falls to 7.0 per cent, it will not be an automatic trigger for rates to rise, but will depend on other factors affecting the economy. The 7.0 per cent figure will be the “way station” at which a review of interest rate policy will begin.

The Bank said that it had decided to use unemployment as the threshold because unemployment measures are reliable and well understood and an “unemployment threshold allows monetary policy to test the scope for a rebound in productivity, while the knockouts ensure that price and financial stability will not be put at risk.”

The MPC explained that if unemployment falls slowly because the productivity of the labour force improves to generate growth then “there would be more scope for the economy to expand without generating inflation and the bank rate could be held at its record low level for longer. However, the opposite is also true.

If price or financial stability is put at risk then the policy of forward guidance would be “knocked out”. The bank said this would not necessarily mean a change in base rate but would be a prompt for the MPC to review its policy.

Howard Archer, Chief UK & European Economist at IHS Global said: “With the economy currently showing marked, widespread improvement and polls suggesting that consumers suspect that interest rates will start rising within a year, the Bank of England is very keen to reassure businesses and consumers that interest rates will be unchanged for an extended period to come. It is also aiming to put significant downward pressure on gilt yields.”

The adoption of forward guidance linked to interest rates is similar to the strategy being used by Mr Carney’s counterpart Ben Bernanke at the US Federal Reserve.

What we can be certain of following this hugely important day for the central bank and the UK economy is that interest rates will not go up for at least three years, until 2016, subject to the price and financial stability conditions.

For the unemployment rate to fall below 7.0 per cent implies net job creation of between 750,000 and one million. Most experts predict that unemployment is likely to rise over the next 12 months, so any change in the Bank of England base rate is a long way off.

Mr Carney was asked by the Chancellor, George Osborne, to provide an assessment of the merits of forward guidance and to assess the impact of the possible trade-off between growth and inflation.

In his reply to Mr Osborne, published today, Mr Carney said forward guidance can “enhance the effectiveness of the exceptionally stimulative monetary stance in three ways”.

Firstly, it gives clarity to how the central bank are thinking in terms of the trade-off in getting inflation back to the two per cent target whilst still trying to get economic growth and reduce unemployment.

Secondly, it becomes easier to predict when interest rates will rise and stops the market raising rates too early as the recovery gathers momentum and thirdly it gives the Monetary Policy Committee (MPC) the ability to explore how it can get employment and output at sustainable levels without “putting price and financial stability at risk”.

Mr Carney said it was important for the MPC to be clear and transparent in its communication using forward guidance.

The Bank of England said the adoption of forward guidance “will reinforce efforts to secure a sustainable recovery in the UK”.

In his response to Mr Carney’s comments, George Osborne said “I agree with you that forward guidance can play a useful role in enhancing the effectiveness of monetary policy and thereby supporting the recovery”.

However, the news is further bad news for savers who are set for at least another three years of low rates that are unlikely to outpace inflation, even if it does finally get down to its target of 2.0 per cent in 2015.