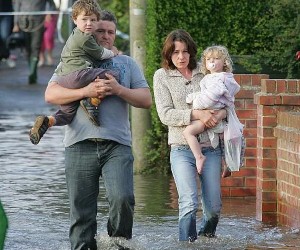 Talks on finding a workable solution to flood insurance have stalled

The Association of British Insurers (ABI) has criticised government ministers for rejecting the only “workable” solution to the problem of providing affordable insurance to potential flood victims.

An agreement that allows flood-risk homes to get affordable home insurance is due to expire in June 2013 and negotiations between insurers and government minisers appear to have broken down.

The ABI accused the government of blocking the only viable deal and the government hit back by saying the ABI was being "opportunistic" in putting a spotlight on the negotiations when parts of the UK are being hit with floods.

The "impasse" comes as parts of the UK are hit with floods. So far around 800 homes in the UK have been flooded in the last few days with thousands more still at risk. There are cuurently 490 flood warning in operation.

The ABI says that it has put forward a “very simple and elegant” proposal that would require some state assistance but that the plans have been rejected by government ministers.

Around 200,000 households may be unable to get home insurance when the current agreement that allows them to do so runs out in 2013.

The ABI wants an overdraft to fund the extra costs it will have to incur from next June and wants to charge every home that is in a high risk area an extra £10 on their premiums to help pay for the extra costs and repay the overdraft.

Nick Starling, Director of General Insurance at the ABI said: "The Government has indicated it will not provide any temporary overdraft facility for the insurance industry's not for profit scheme, which makes it very difficult for it to go ahead. As a result, negotiations have hit an impasse.

“Insurers know their customers are increasingly worried about flood cover and we will therefore continue talks with Government to try and find a way forward.”

The ABI wants the government to commit to a joint solution so that households who have a high risk of flooding can afford insurance in the long term. The ABI says current talks have reached an “impasse.”

The ABI says that the latest rejection comes after the government refused to consider providing a temporary overdraft facility for a proposed not-for-profit special insurance fund for 200,000 high-risk households who would otherwise struggle to get home insurance when the current arrangements come to an end next year. The fund would be used to pay out on claims if there were major floods before the scheme has had a chance to build up its reserves.

The last time there were major floods in 2007, UK insurers were hit with a £3 billion bill.

Mr Starling said that if the government does not accept the option put forward the only alternative is the open market but added that insurers remained open to further talks with ministers.

The government criticised the ABI for raising the issue at a time when parts of the UK are being hit by floods.

Environment Minister Richard Benyon said: “It’s actually rather demeaning at this particular moment to be talking about this.

“It’s really important for people who live at flood risk to know that the Government is determined to find something that’s better than the current arrangement.

Mr Benyon said that the government is trying to protect taxpayers. He said: “We don’t want to see a huge burden going on insurance premiums across the country.

However, Mr Starling hit back saying: "The severe floods experienced by many areas of the UK this year are a reminder of the rising flood risk facing the UK. It is therefore vital that insurers and Government tackle this issue together – this is not just a problem for insurers. No country in the world has a free market for flood insurance with high levels of affordable cover without some form of Government involvement."

“It’s a very simple and elegant solution and we’re struggling to find out why it’s presenting such a difficulty for the Government, given that it will be able to make sure there’s availability and affordability for people in these situations.”