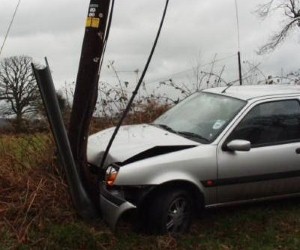 The AA has reported a big increase in both home and car insurance claims as a result of the storms that have hit many parts of the UK over the past few days.

The AA says claim lines are experiencing a 200 per cent increase in calls than would be normally expected at this time of year. Roofs and cars have been particularly affected with the AA reporting an increase of 12 times normal ratios in claims for roofs.

Simon Douglas, director of AA Insurance says: "Last year it was snow and ice, this year high winds and heavy rain: both bring a sharp increase in home insurance and emergency claims.

"Common claims are for windows broken by falling tree branches or roof tiles as well as falling gutters and aerials. Comparatively minor damage to a roof can be significantly worsened by high winds and we are seeing claims of this kind, too."

Repairs are being affected by the continued heavy winds and bad weather.

"Customers whose homes have been damaged by the gales and rain should contact their home insurance company who, if their policy includes it, will arrange for a contractor to effect a temporary repair as soon as possible, preventing further damage to their home,” added Mr Douglas.

Compare home insurance and protect your most valuable possessions.

The weather has also caused an increase in damage to cars and other vehicles. Cars that have been hit by debris, including roof tiles, do not usually qualify for an insurance claim against the tile-owners home insurance as Simon Douglas points out.

"A common misconception is that if you car is damaged by the tiles from your neighbour's roof in a gale, that you can claim for damage from their insurance. In fact, that is rarely the case, unless poor maintenance can be proven – you would need to claim off your own car insurance policy."

The same point applies to damage from falling trees. "Unless a tree has previously been identified as being dangerous and the owner has done nothing to make it safe, it's not possible to claim from the owner of a tree that falls on to your vehicle."

Mr Douglas also warns against attempting to drive through standing water on roads.

"I appreciate that it's sometimes difficult to tell the difference between a wet road surface and water that might be several inches deep, especially at night.

"But deep water can cause significant unseen damage and in most cases, a car that has been severely affected by flood water will be written off, even if it appears to be otherwise undamaged."

Compare car insurance policies from more than 100 insurers and brokers.