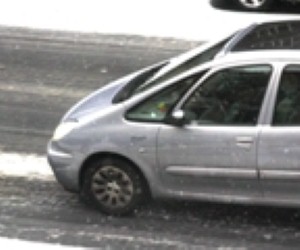 The AA has collated details of the carnage that has been seen on the UK’s roads during the recent spate of winter weather.

It says that in just five days between the 18th and 22nd January, 8,400 cars have been damaged with an estimated cost of £4.2 million.

The AA said that it received 36 per cent more claims in the five days that over the same period the week before.

Saturday was the worst day when 54 per cent of claims were attributed to the winter weather.

Perhaps surprisingly though it says that the number of personal injury claims received when the snow and icy weather comes falls by 47 per cent as drivers take more care behind the wheel.

It is quite possible that your vehicle could have been damaged without you actually moving it. The AA said 10 per cent of the claims were for cars damaged when they were parked.
Tail-end shunts were the second most common type of accident, closely followed by hitting kerbs which are often hidden from view under the snow.

Some of the reasons behind the claims are quite amusing unless you were actually involved.

Examples of comments made include:-

"My car slid down the hill on its roof"

"I thought the pond was the road!"

Just under six per cent of claims were for cars that hit street furniture such as road signs, lamp-posts and even park benches.

The AA said: “One customer managed to fell a lamp-post which collapsed on to a passing car but fortunately none were hurt. Oddly, the lamp stayed on!  Another driver slid through the cones and into a roadworks trench.”

Simon Douglas, director of AA Insurance, said that in most cases, snowy collisions don't cause injury but can end up with costly claims.

"Parked cars come off badly," he says.  "Unfortunately, some of our claimants returned to their cars to find them dented but no note from whoever caused the damage."